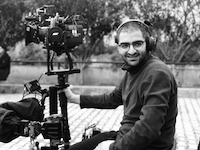 Fares Corbani started his career at an early age as a camera operator.

Early 2010, his interest in the art of Steadicam, led him to attend a workshop at the “Sachtler Academy” in Munich-Germany with the rig designer Mr. Curt Schaller.

As Fares’ career quickly expanded, he became an emerging Steadicam operator in the region and key to many production houses, directors and cinematographers from different cultures, origins & backgrounds.

Back in 2015, Fares resided in Hollywood – Los Angeles, the city of lights, for 6 months. During his stay, he met the Steadicam inventor Mr. Garett Brown, with whom he completed a Steadicam workshop. Also, he attended cinematography master classes at the Global Cinematography Institute – GCI and the ASC Masterclass.

He gained a lot of experience from the expertise of great renowned directors of photography and ASC members.

Fares explored in depth his passion to Steadicam and decided to enhance his skills and upgrade his gear with the new Trinity Arri system in 2017. To master its usage, he attended a one-on-one workshop with the product designer Mr. Curt Schaller at Arri’s headquarters in Munich.

2019 was full of achievements for Fares; He achieved a new milestone by being the first in his region to be accepted as an active member at The Society Of Camera Operators- SOC in Hollywood.

Few months later, at the age of 29, Fares was chosen by Arri to be their 4th certified trinity trainer in the world.

Spreading knowledge and sharing experience remain Fares’s permanent passion which he enjoys practicing all over the world through conducting different workshops, trainings and showcasing at exhibitions.

Fares continues to be a pioneer in the moving camera industry; in 2020 he got accepted at The Association Of Camera Operators - ACO in UK as a full member among the world’s top camera operators.

Besides focusing on the operating and training, Fares is always working on being up to date with newest technologies and latest equipment in order to gain new inspiration and widen his horizon in the film industry world.

Therefore, he makes sure to attend at least an exhibition per year (NAB, Cinegear, Camerimage, IBC…) and he benefits from these periods to polish up his industry skills and find out about the latest innovations and trends.

Fares maintains his position in being one of the leaders in the Trinity market, his visionary perspective has earned him opportunities to work on global prominent scale. Fares moved to Dubai later in 2020 knowing deep down that this step will be the introduction to a bigger move in the near future.